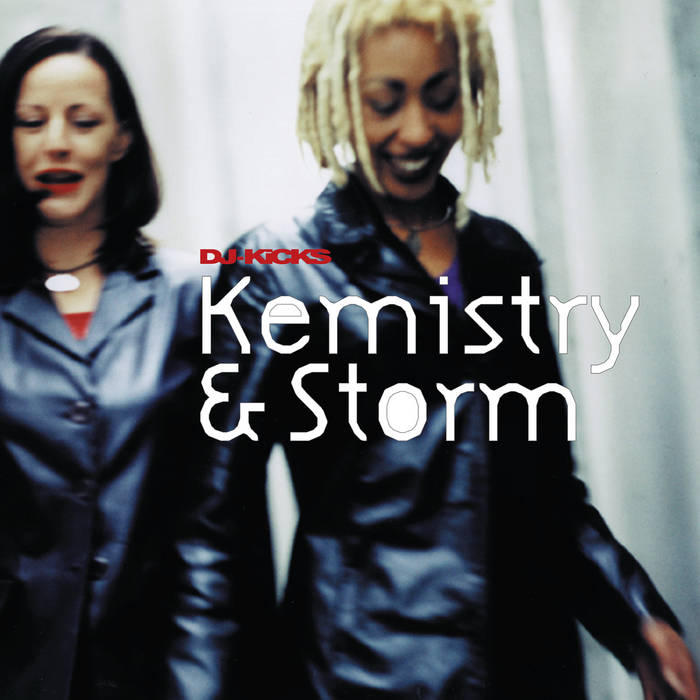 rumblefish99 Absolutely fantastic mix. From the selection of tracks to the clean transitions and pacing, this mix is a must-have. Favorite track: Mission Accomplished.

Badzie Possibly one of the greatest and certainly most enjoyable D&B mixes of all time. It just never lets up and covers ground from doombass to feelgood with such incredible verve and dexterity that it always leaves you delighted after every listen. I don’t know how they did that, but its a testament to their talents. RiP Kemi - you are still missed - and wishing Storm ever greater powers of sonic ascension. Wonderful stuff.

bon <3 this mix gives me an instant rush of creativity and inspiration every time i listen <3 Favorite track: Closing In.
more...

Kemistry & Storm's landmark DJ-Kicks is re-issued across all formats and available on streaming and download to mark the 25th anniversary of the series. The mix itself also turns 20 years old, and remains one of the most definitive Drum & Bass compilations of all time.

Kemistry & Storm’s DJ-Kicks will always be an extra special moment in the history of Drum & Bass and thanks to its enduring relevance and cult status it holds an important place in the DJ-Kicks archive.

It all began in the late 80s: KEMISTRY & STORM had had enough of their hometown in middle England and moved down to London. Until then, Birmingham-born Kemistry had spent most of her tender years studying as a make-up artist in Sheffield while Storm was studying radiology in Oxford. The pair discovered acid house in London, partied at illegal warehouse raves, and at the end of the 80s stumbled upon ‘Rage’, Fabio and Grooverider’s legendary and influential club night at Heaven, which can be legitimately dubbed as the origin of the entire Breakbeat/Jungle/Hardcore/Drum ‘n’ Bass movement. This is where they decided to dedicate their future entirely to music – as DJs.

They watched DJs at work in clubs, went and bought records and saved up for their first turntables. In 1990 they met the then unknown Goldie, dragged him along to ‘Rage’ and infected him with the Jungle/Breakbeat virus. Goldie, who at the time was living off his graffiti art (he was and remains one of Englands best taggers) decided to support them by putting up the money for a couple of Technics MKII in 1991. During the same year the trio started a radio show ‘Mack Three’ with pirate station Touchstone FM – every Sunday from 6-9 KEMISTRY & STORM mixed along to Goldie’s rapping, under the pseudonym of Mac Daddy G.

When KEMISTRY & STORM collaborated with Groove Connection, the agency run by Fabio and Grooverider, things soon started happening – suddenly they were no longer on the dance floor or next to the decks – they were actually DJing at them along with their heroes Ray Keith, Jumping Jack Frost and of course Fabio and Grooverider – a dream come true.

In 1994 Goldie founded the record label Metalheadz with Doc Scott, but signing with the major ffrr in the same year meant that he neglected his own label somewhat – with consequently poor record sales. KEMISTRY & STORM soon changed all that as they joined Metalheadz and immediately took over press, bookings and A&R duties. Thus the duo made a substantial contribution to the success of Hidden Agenda, Lemon D., Peshay and especially Photek. (For the last two years they’ve no longer been involved with the day to day running of the label, but still represent it with their ‘Sound of Metalheadz’ and as long-term resident DJs of the Meatlheadz nights in the Blue Note.)

Due to their talent, commitment and experience, KEMISTRY & STORM have recently been able to play in the league of DJs who ‘for quite some time now have been constantly reappearing in clubs where they are virtually a permanent fixture, always have a friendly word to say and know that it’s gonna be a good party, which is not just reflected by the state of your wallet the next morning’ (De-Bug). Since KEMISTRY & STORM’s existence lies at the cutting edge of Drum ‘n’ Bass they can clearly get their hands on the hottest dubplates and VIP mixes of the most official tracks, and ‘when they are put away in the record case, it can be really heart-wrenching, like the end of a beautiful friendship’ ( Jayne Storm)

The Who’s Who of British Drum ‘n’ Bass producers abounds on the forthcoming DJ Kicks, and with Goldie, Dom + Roland, Digital, DJ Die, Johnny L and J Majik, features old friends of KEMISTRY & STORM. Any trainspotter can see that with labels like Metalheadz, Full Cycle, XL, Test, Renegade Hardware or Formation, the duo work their way through a range of the most diverse styles, and make DJ Kicks an exciting testament to contemporary Breakbeat culture.

Bandcamp Daily  your guide to the world of Bandcamp

New sounds from Mavi, Ivy Sole & Moderator, plus AJ, the One joins the show, for her latest release